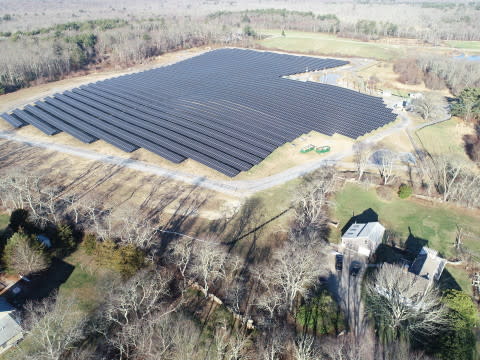 Ameresco, Inc., (NYSE: AMRC), a leading cleantech integrator specializing in energy efficiency and renewables, today announced the commercial commissioning of its solar power site in Tiverton , Rhode Island and mechanical completion at its Cumberland, Rhode Island site. Both stages mark significant milestones in the advancement of solar energy resources within the state.

Located on a former cornfield, Ameresco’s solar power plant in Tiverton comprises more than 12,000 modules with a power generation capacity of 4.95 MW.

RIAC has entered into a long-term agreement with Ameresco as the designated purchaser of clean energy generated by the two sites. The RIAC has long supported the development of various sustainable resources and environmental programs aimed at minimizing the potential negative impacts of airport operations.

“Our projects in Cumberland and Tiverton are prime examples of the economic and environmental benefits that renewable energy solutions provide to our customers. By developing and implementing an electrical capacity of over 10 MW and providing over $ 790,000 in annual energy savings, these projects provide a source of renewable energy that directly advances the company’s commitment. State towards the expansion of clean energy within its renewable energy portfolio. Said David J. Anderson, Executive Vice President and Director of Ameresco.

Commercial operation of the Cumberland Project is expected to be completed by April 2021.

About Ameresco, Inc.
Founded in 2000, Ameresco, Inc. (NYSE: AMRC) is a leading cleantech integrator and developer, owner and operator of renewable assets. Our comprehensive portfolio includes energy efficiency, infrastructure upgrades, asset sustainability and renewable energy solutions delivered to customers across North America and the UK. Ameresco’s sustainability services in support of customers’ pursuit of Net Zero include upgrades to a facility’s energy infrastructure and the development, construction and operation of distributed energy resources. Ameresco has successfully completed energy saving and environmentally friendly projects with federal, state and local governments, health and educational institutions, housing authorities, and commercial and industrial customers. With its headquarters in Framingham, MA, Ameresco has more than 1,000 employees providing local expertise in the United States, Canada and the United Kingdom. For more information, visit www.ameresco.com.

Announcement of the completion by Ameresco of a renewable energy asset project is not necessarily indicative of the timing or amount of revenue from the energy asset, the overall revenue of the business for a particular period. or trends in the total assets of the developing or operating business. The Tiverton site was included in our previously reported operating assets and the Cumberland site was included in our previously reported developing assets as of December 31, 2020.