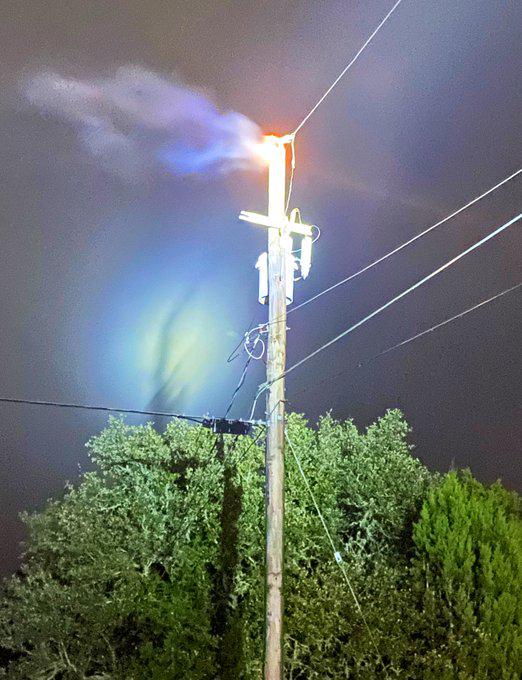 Since early March, around 100 wooden utility poles from CPS Energy have caught fire in San Antonio. On Tuesday, fires caused at least two power outages in parts of the utility’s service area.

CPS officials attribute the fires to dry conditions and high levels of pollen, causing dust and dirt to accumulate on the insulators. These are the devices, porcelain or polymer, that hold the power lines to the top of the pole and prevent the power lines from touching.

When a light rain fell on Monday, it did not dump enough water to clean the dirty insulators that sit atop CPS’s 400,000 power poles.

Instead, in some cases, the sprinkling of water has mixed with dirt and pollen to create a “mush” on the poles, which can conduct electricity. When the electricity “drags” off the insulation and through the slush, it can heat the wooden pole and start a small fire, said Richard Medina, vice president in charge of the city’s massive power line system. .

“For many utilities, it’s really a common thing that happens in the spring,” Medina said. “Whenever there are drought conditions and then there is a forecast of rain, all of our system operators are hoping for heavy rain,” which washes away dust and dirt buildup.

CPS distributes electricity through a network of approximately 700 circuits in its service area.

When a pole catches fire, the utility shuts off power to the circuit the pole is in so operators can put out the fire and make repairs. Since many thousands of households and businesses may be served by any one circuit, stopping the flow of electricity to a circuit can lead to major outages.

CPS stranded 900 customers when it turned off a circuit Tuesday morning, and another 3,000 ratepayers lost power when the utility put out another pole fire later the same day, Medina said.

“They’re de-energizing the circuit so they can make repairs very quickly,” he said.

By late Tuesday afternoon, however, only seven customers remained without power, according to CPS.

Fires usually do not cause major damage to power lines. To repair a pole that has caught fire, CPS workers can replace the wooden crosspiece that holds the wires or cut the top of the pole if the tip catches fire, Medina said.

“It’s unusual that we have to replace an entire pole,” he said.

CPS Energy owns approximately 6,000 miles of underground power lines, where vegetation and Mother Nature are less likely to stop the flow of electricity.

The utility allocated $10 million to bury more wires in areas “where we have a lot of vegetation and things growing in the lines and we can’t get to them,” Medina said.

But CPS still has over 8,000 miles of overhead wire, so burying the entire system would likely be prohibitively expensive.

CPS Energy urges residents who see a burning pole to stay away. A fire could break part of a pole and cause the power line to fall.