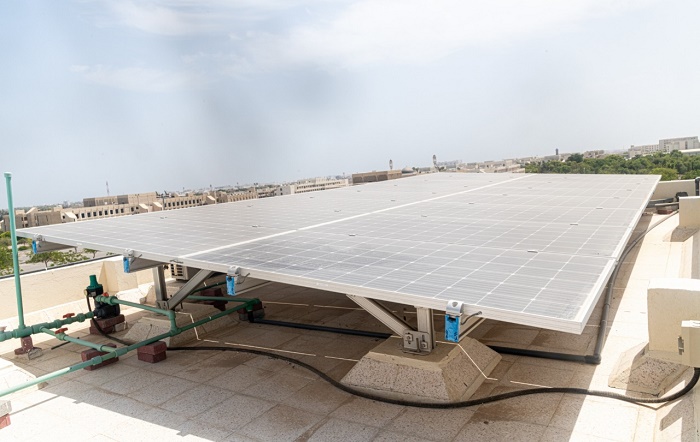 The research team works to integrate various energy sources to efficiently generate electricity through the use of renewable resources.

Muscat: An experimental station at Sultan Qaboos University’s Sustainable Energy Research Center (SQU) seeks to conduct experiments related to energy security and efficiency while minimizing costs and reducing harmful emissions for the environment. The experimental station is considered one of the most important projects of the center.

This is part of global efforts to achieve sustainable development and ecological balance that require focusing on the use of renewable energy sources, such as solar and wind power, to produce and store energy. electrical energy. This dynamic is one of the main factors associated with the establishment of the hybrid power plant by the Sustainable Energy Research Center of Sultan Qaboos University (SQU).

The hybrid power plant is equipped with advanced equipment and devices, including a smart micro-grid system, electrochemical hydrogen fuel cells that operate through a methanol fuel reformer and a deionized water system, in in addition to providing state-of-the-art laboratories for electrochemical experiments and a methanol storage room.

The plant also includes a diesel generator, wind turbine, and ground and rooftop photovoltaic (PV) systems, while ongoing efforts are made to ensure that the plant has the necessary equipment to achieve its primary goals. Through these efforts, the Sustainable Energy Research Center remains at the forefront of research into the production of electricity from renewable energy sources in place of diesel fuel, especially in rural areas.

Construction of the hybrid power plant has already progressed in several stages. The first started in 2017 with a research project titled “Studying the Performance and Monitoring of Solar Photovoltaic Energy” led by a research team led by Dr Rashid Al Abri and Dr Amer Saif Al Hinai of SQU. The project was funded by Nafath Renewable Energy LLC. During this stage, the plant included a 4 kW ground-based photovoltaic system combined with a 3 kW wind turbine and storage batteries with a capacity of 900 Wh. The hybrid system has been designed to operate in stand-alone mode or connected to the SQU distribution network.

In 2019, the second phase of the plant’s development was associated with a research project funded by Salalah Methanol Company LLC (currently OQ) and again led by Dr Amer Al Hinai. The project focused on assessing the potential of methanol to generate electricity in rural and remote areas of the Sultanate. The plant, at this point, included a laboratory, researchers’ offices, a methanol storage, and a water treatment and purification plant to produce distilled water which is used in the production of the fuel mixture. for the hydrogen fuel cell.

On-going work at the plant includes a project that includes a 5 kilowatt hydrogen fuel cell equipped with a methanol reformer, a 6 kW diesel generator, a 5 kW rooftop photovoltaic system and batteries. 15 kWh lithium-ion storage. In addition, the intelligent energy management system connects the integrated resources to the university’s distribution grid or can be operated as an isolated micro-grid system that supplies local plant loads. The project generally focuses on the use of methanol to generate electricity in an economical and environmentally friendly manner due to the low levels of harmful emissions.

After the conclusion of the first two phases of the construction of the plant, efforts were directed first towards evaluating the use of methanol to generate electricity for rural and remote areas. The research team works to integrate various energy sources to efficiently generate electricity through the use of renewable energy resources. In addition, a battery energy storage system will be used to mitigate energy fluctuations and stabilize the system.

The hybrid system depends on a solar photovoltaic system, a hydrogen fuel cell and a fossil fuel diesel generator. Batteries are used to store energy during excess production and can be reused during production deficits. It is expected that the hybrid power plant will soon be operational and synchronized with the SQU distribution network. Efforts will continue to be extended to the production of green methanol from renewable energies.